I Should B sharing our nursing journey

I guess I'm feeling nostalgic or something. Blog posts are flying out of me. I know J will be waking up soon so this will be the last one for today. I don't know when the next one will be bit could be days, weeks or months. But, there will be more :-)
Okay so as I mentioned before an LC never showed me how to nurse J. I asked a NICU nurse and she helped me figure it out. I could only do what is referred to as the "football hold" with him due to the IV in his head. He latched for like a millisecond and then screamed. I cried.
I always wanted to breast feed. We had to make the decision to give him formula because my milk didn't come in quick enough and J was having sugar level problems. Our goal has always been to do what is best for the baby. So, I pumped my colostrum and they would mix it with formula. J had to be able to eat a certain amount (I can't remember the amount) before he could leave the hospital. Anyways.. Back to our nursing story.
When we went home J had only latched for tips maybe a total of 5 times. But he had latched so I had faith. I was still pumping as much as I could to get my milk in. It came in on day 5. I was pumping into these tiny cups for colostrum and next thing I knew I had filled it up. I was so happy. The hospital had sent us home with some formula. A package that was already open of Similac they had used with J and then another package of Enfamil. During the first few days of having J home he got this awful diaper rash. I mean it was purple and ugly. When it started to bleed I called the doctor. We had been using diaper cream and it was getting worse. Well turns out J is allergic to the Enfamil formula or that is what the doctor thought. She wanted me to feed him strictly breast milk for 48 hours to make sure. Um okay that would be a challenge as he has not fully latched yet but I had my pump and was ready to do it. Anything for my baby. Three hours after this was decided I was pumping and MY PUMP BROKE! Yep that happened. And it was a Friday. The doctors office was closed. I didn't know what to do. I panicked (I have a habit of doing that if associated with J). I immediately went to my mommy after infertility board. They told me my insurance should cover a pump. What?! I didn't know that. So I called my insurance. They do cover pumps (yay) but it is a two day process. So good news is I would have a new pump. Bad news is it is the weekend. I posted my update on my mommy group and how devastated and worried I was about what to do for J. I was blessed enough that one of the mommas in the group lived nearby. She was willing to donate some of her liquid gold to help out J and I. I will forever be grateful and in debt to her for this. I honestly don't know what we would have done. The doctor was right and J was allergic to the formula. Breast is best for him. We still had the latching problem to deal with. I again went to my mommy group and again my nearby friend came to the rescue. She recommended an LC she used that lived in the area. I still wasn't able to drive and Al was already back to work. The LC actually came to my house FOR FREE and showed me what to do ( I had it all wrong) and how to help J get a better latch. She found that J had a slight lip tie. She wasn't sure if this was the cause of our struggles or if was simply that I had no clue what I was doing. Turns out it was me and he didn't need any surgery to repair it. Now we are nursing fools. Lol. In the house, in the car(while parked) at restaurants or in a store. We got this!
I am so thankful we were able to figure it all out. My supply has dipped since returning to work but with the help of milk I froze during my leave I am able to keep it up. 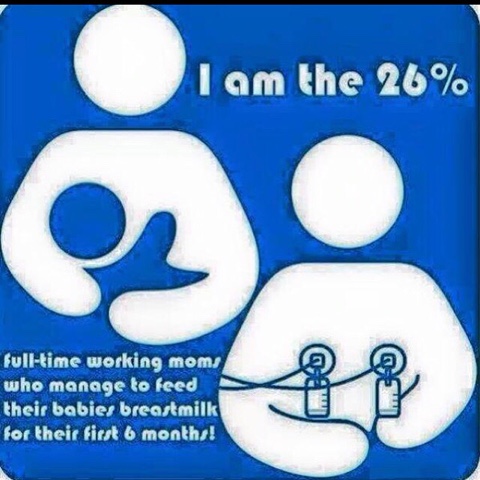 We are going 7 months strong right now and hope to make it to 9 months, then 12. I will let him decide when we stop.
Within reason of course. I won't have a teenager latching for momma milk. Lol
Have a great day Bloggie World. Happy Independence Day to my fellow Americans. J will be going to his first parade, bbq party and pool for the first time today. Today is going to be a wonderful day :-)
Posted by Heather S. @ I Should B ... at 9:03 AM