I Should B sharing a birthing story

I know, I know, I haven't blogged in months. Life with a baby is exhausting and to be honest if I am not at work or with J then I am asleep. I don't want to miss any more than I already do while working. Blogging just hasn't fit in yet. #sorrynotsorry
My handsome man is 7 months old. I was just reading a birth story on another blog and I realized I never wrote mine out. I am writing this not only to share but for a memory for myself. It is 0600 and I just finished nursing him.  It has been 7 months so I hope I remember it all correctly.
Here goes...
I had a scheduled c-section for December 1, 2014 at 8 am. Check in was at 5 am.
Throughout the pregnancy we did not plan on a section. In fact I wanted to have a natural labor with no meds ( I think it was the hormones that had me thinking like this). My doctor office provided a free doula service and this helped me make the labor decision even easier. At about 26 weeks I was assigned a doula. Each weeks we met and went over birthing plan and my exercises and what not. The plan was to labor in as many natural positions as possible but the main focus would be to keep the baby safe. At all costs make sure he is okay. So around 34 weeks the doctor let me know baby was breech. He said that babies have been known to turn this late in the game but due to baby's size it might be difficult. Doctor told me I should prepare myself for the possibility of a section. I immediately contacted my doula and she gave me exercises to help flip him. They didn't work. I did them for weeks and mostly I was just frustrated and had a headache (a lot of the exercises had me inverted with my head down). At 36w1d we went to Disney to see the Osborne Christmas lights. 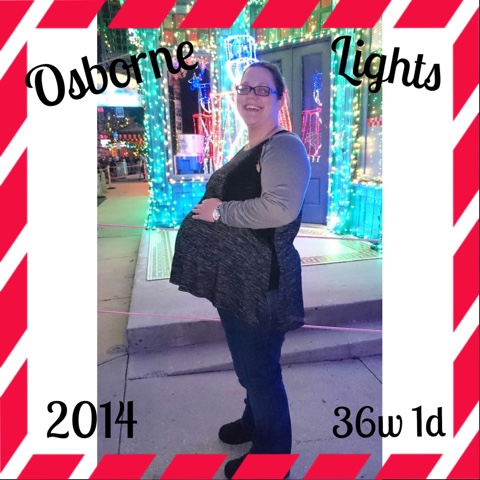