I Should B okay

My last post was very gloomy. Thank you Bloggie world for the supportive comments.
My cousin K has also been a wonderful support system. She is always willing to listen to IF struggles even though she isn't an IF sufferer.
So, after my last post I think God took it to the next level to test me. Well I'm not positive it was a test but it sure felt like one.
At work ,two days after my post, a woman who was 27 weeks pregnant was brought in. She was high off street drugs and had stab wounds to her abdomen. Less than two hours later another woman came in who was 31 weeks pregnant and had just tried to kill herself and her baby. Both of these women* needed help and I had to step out to get ahold of my emotions before I could talk with them.
At first I didn't know how to feel. This was my first exposure to women like this. Hearing of people like this and seeing it for yourself are two different things.
I was shocked to say the least. I was angry at those women for not appreciating what they'd been blessed with. But I knew I needed to find a way to not let my emotions stop me from doing the job I love.
While I was on my "time-out" a coworker got a call from her doctor. Her doctor confirmed she was pregnant! All her tests at home had been negative. Seeing her face during that moment was a turning point for me. She was so full of joy and it was contagious. :-) Seeing her reaction and hearing her news brought me nothing but happiness. Not a single pang of "why not me" or "when will it be my turn".
This was a day full of tests of my emotional strength. I was able to return and help the women objectively. Not because i was happy for them but because I knew life throws you curve balls and you can't be afraid of them. I still had some negative feelings about how they were mistreating themselves but they were not feelings so strong that I was unable to preform my job duties. I don't know what the final outcome of those women and their babies will be but I know I was able to perform my job duties towards helping them. They have to decide whether to keep it up. I will remain hopeful for them and other women like them.
Since then friends on Facebook have announced pregnancies and I didn't feel anything but joy.
I know that one day I will be getting the call from my doctor telling me I'm pregnant. My face will fill with elation and pure happiness. Until that day I'm happy for the women that DO get the call.it gives me hope. I'm sure I will have a few down moments but I think the worst is past me.
I think I needed to hit rock bottom emotionally to get to a good place. I'm not happy about how I got here and hope I didn't hurt anyone in the process.
Life can throw you curve balls Bloggie world and sometimes they might hit you head on. Just remember to pick yourself up because you are a survivor.
*details were altered for privacy purposes 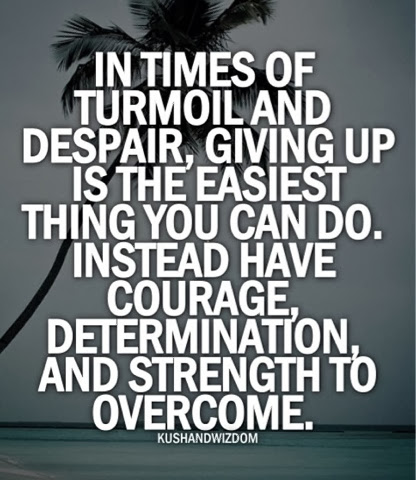